Our FIRST ever robot
Merlin was the FIRST robot we ever built. We built Merlin for the 2015-16 FIRST Res-Q season. At the beginning of the season, we wanted Merlin to drop the 2 climbers in the bucket and climb into the low zone during autonomous. During the teleop mode, we wanted to have our robot climb into the mid zone and be able to drop both blocks and balls into the low bin. To climb the mountain, we wanted to use tank treads because we thought that they would give us the most traction climbing up the ramp. Below is a prototype of our tank tread drive. 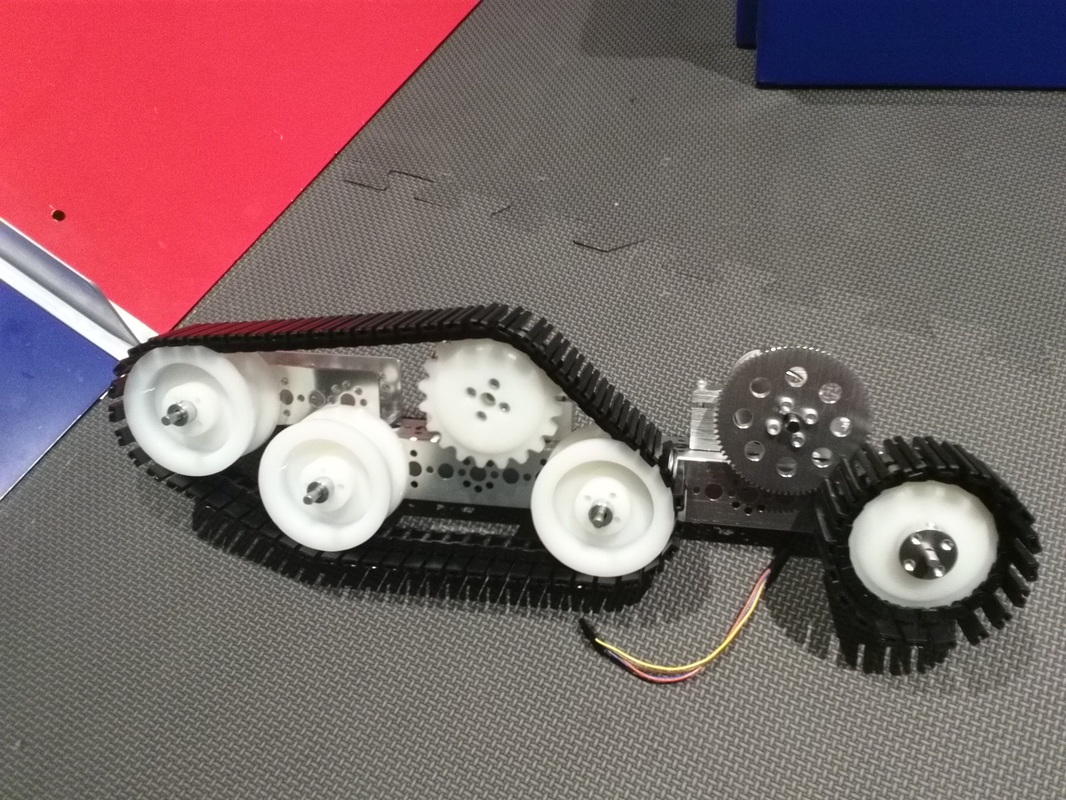 To pick up blocks and balls we wanted to use an arm with a scoop. We wanted the arm to have a 4 arm linkage so that the end of the arm would always stay parallel to the ground. This way the drivers wouldn't have to worry about the angle of the end of the arm changing. Below is the picture of the arm attached to the tank tread drive. 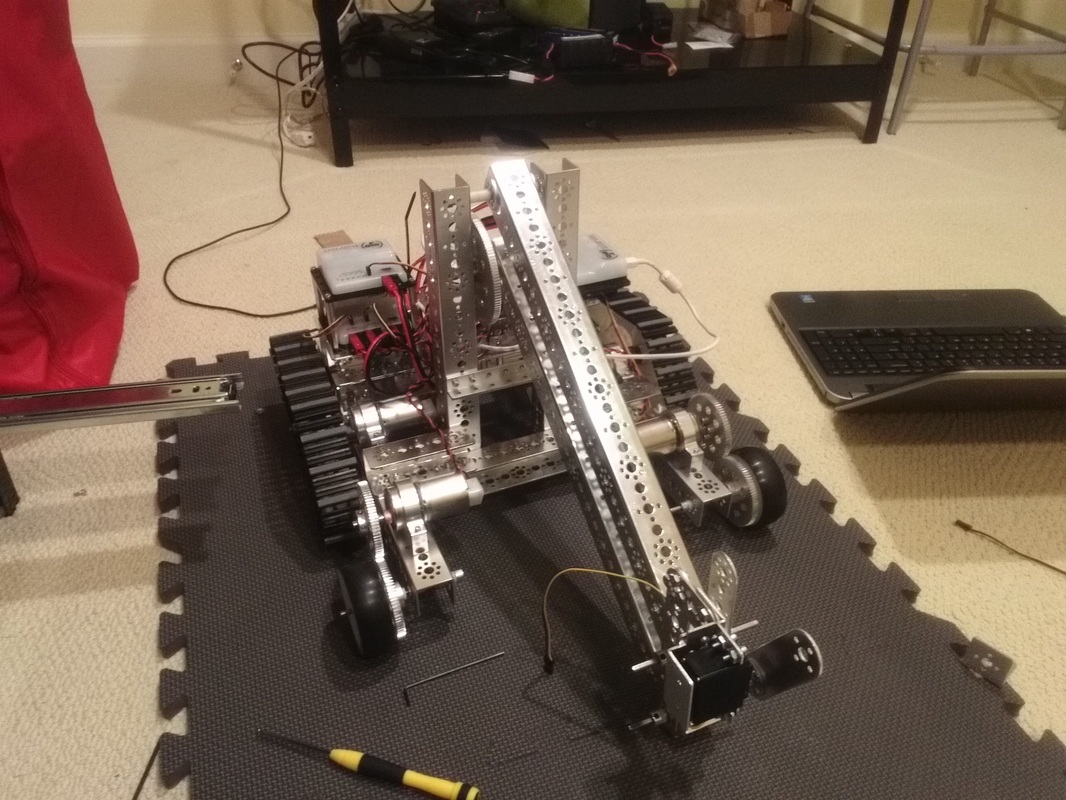 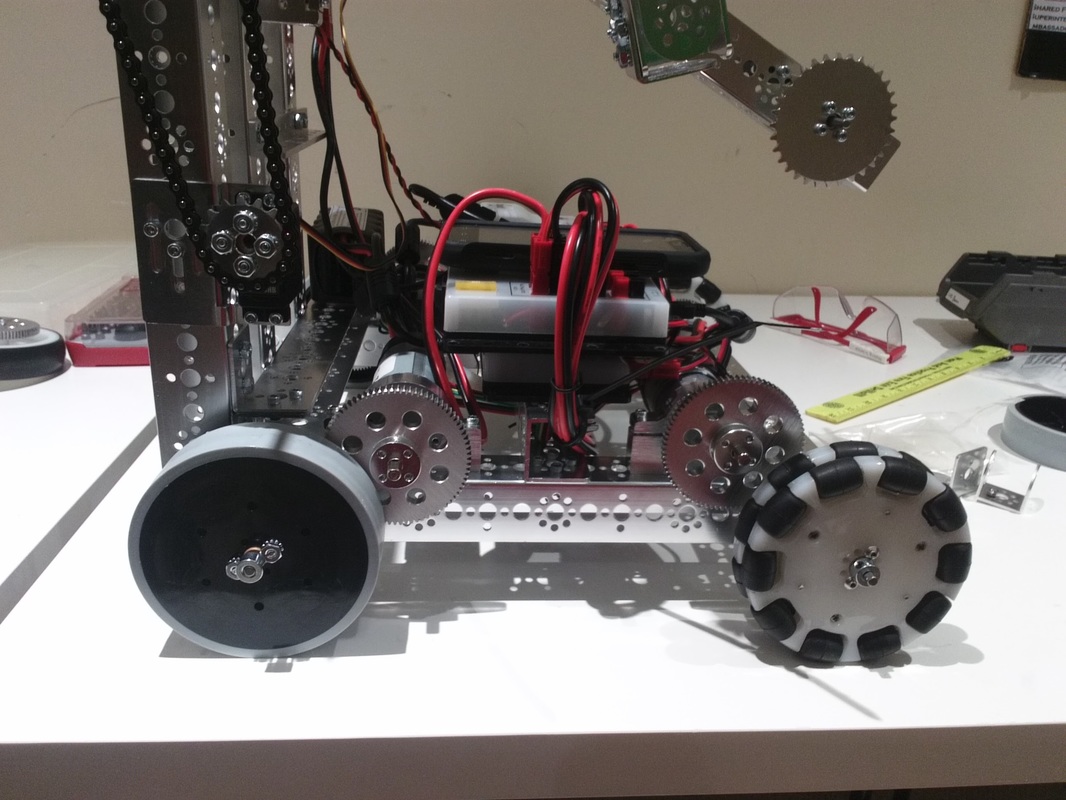 This worked much better than any other robot we had made so far. It was also very maneuverable. The last thing we wanted to try out was all 4 Andymark Stealth wheels. Maneuverability wouldn't really matter with our strategy so if we can climb the ramp faster that would be the best. Below is a picture of all 4 Andymark Stealth Wheels. 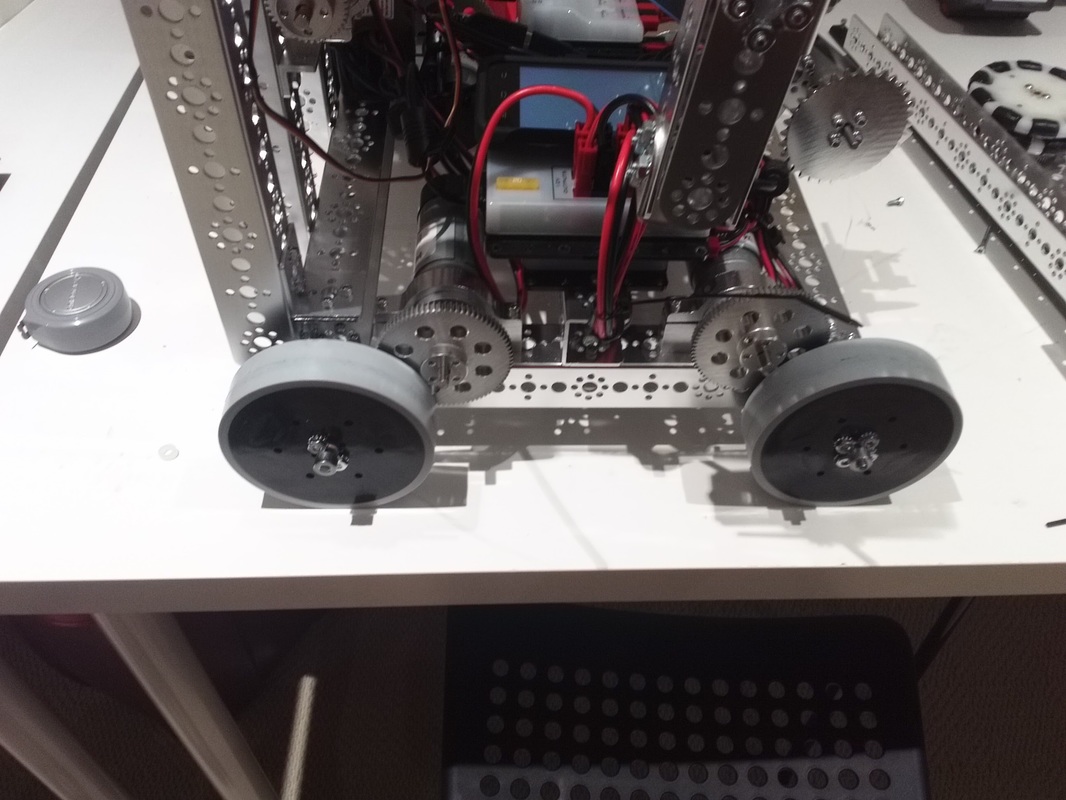 This climb the ramp really well. It would be able to get to the midzone on our ramp reproducibly. After this we started working on our hang. We decided that we would use a rack and pinion to pull ourselves up from the bar because it would be a very simple and reliable mechanism. We built this arm and we connected it to a tetrix motor. It had a gear ratio of 2:1 so we would get more power and be able to lift up our 20 pound robot. Below is a picture of the robot with the arm. 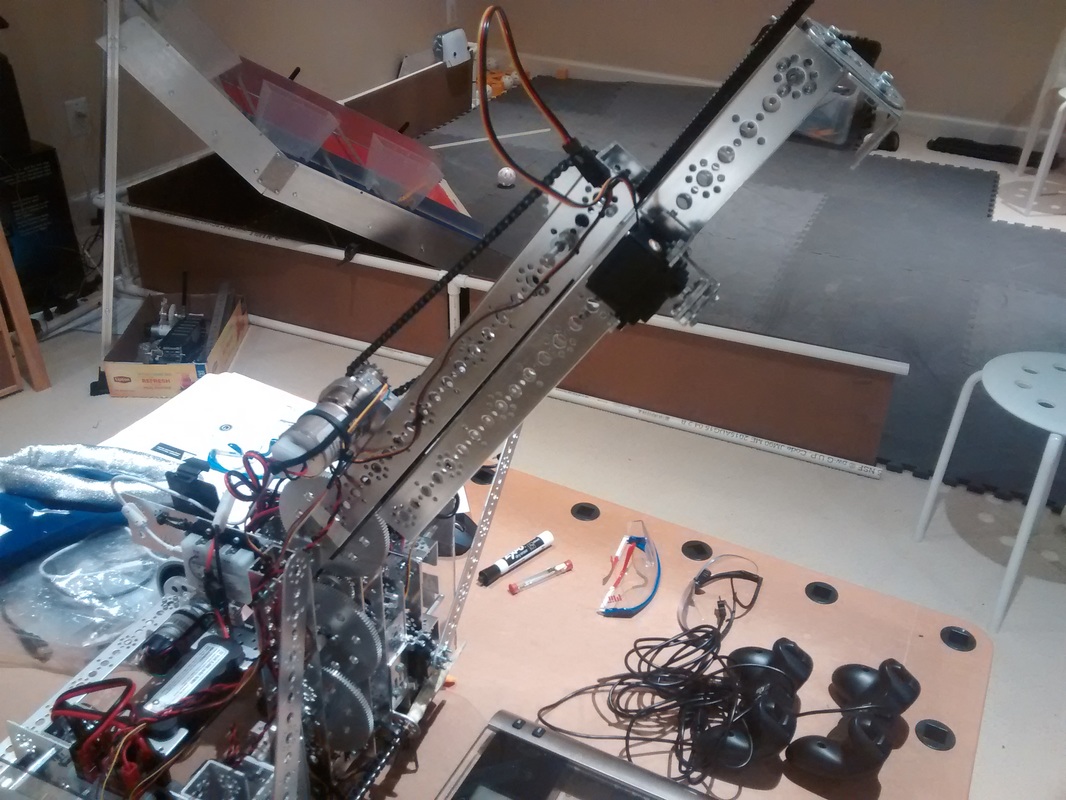 This worked really well to pick Merlin up but it would only get Merlin to the high zone because the arm was located so high on the robot. In order to fully complete a hang, we needed the arm to fold back into the robot while we were hoked onto the par so the robot would be lifted off the high zone and count as a hang. After doing some math, we found that if we hooked a tetrix motor to a 1:27 gear ratio, it would be able to have the robot hang. In order to have the arm fit, we had to use an idler gear to allow the robot to hang. This all worked in the video below.
After doing a couple of hangs, we found that the axle that the idler wheel was on started bending a lot. We replaced it and tried another hang but it bent again. We decided that we were going to get rid of the idler gear and shift the entire gear box up 1 tetrix spacing. This meant that the drivers would have to pay closer attention when driving because if the arm is fully in and the robot has the arm angle change, the rack and pinion could snap. When testing the hang without the idler, we found that the robot would be able to complete the hang but then it would slowly droop down and touch the high zone. The bent axle was in fact causing enough friction to keep the robot hanging. This wasn't good engineering design so we decided to leave it as it was and settle for the high zone for our first couple of competitions. Less than 3 days before our first qualifier, we created an autonomous mode. It worked well but got stuck on debris. We created a ziptie shield to block debris from getting stuck on the wheels and we shortened the autonomous program to only climb to the midzone. We also had these servo's to trigger the ziplines and we put a servo on our huge arm to drop the climbers. Here is a video from our FIRST Qualifier.
We were a little slow at driving in that round but we got much better over the day. We were undefeated in our qualifying matches and we were the finalist alliance. This got us a spot at the state championship. We only had a week to our next qualifier so we just practiced driving and worked a little on the reproducibility of our autonomous program. We added the climbers to the program but didn't use that program much because it was unreliable. Below is our favorite video from that qualifier.
At this qualifier we also were the finalist alliance and had some USB disconnects. we also went undefeated in our qualifying matches. We had 2 weeks till our next qualifier and focused on getting Merlin to hang. We tried using a worm gear but the tetrix worm gear would strip all of the axles. We decided that we would keep the gear train and have it so the robot would clamp onto the hanging bar using hooks. This would also get us the all clear signals. Below is a video from the Delaware State Championship of us hanging. This was also our highest score ever recorded and at that time, it was the second highest score in the world.
We were the winning alliance at the Delaware State Championship. We also won the control award for our autonomous. Our next qualifier was in 2 weeks. We didn't really add much. We improved our autonomous programs to give it a more reproducible start but the other components of the robot worked. Our robot competed at the PA qualifier where we were the Finalist alliance and earned a spot to the PA states and then the day after we went to the Maryland State Championship. Below is a really fun video with our friends from Electron Volts.
We were picked by Cubix at Maryland States and we were part of the winning alliance moving us onto to Super Regionals. At super regionals, we wanted our robot to be faster. We replaced the Andymark 60 motors with Andymark 40 motors. We also tried to create a linear cascade with our rack and pinion. This made our robot able to grab onto the top bar quicker without having to pull ourselves up the ramp. At Supers, our arm was not reproducible. The extra cascade didn't help the robot out. We still had high scores and did well. We were ranked 9th in our division which earned us a spot at the World Championship. Below is the last match we played at the Super Regionals.
For the world Championship we wanted to completely redo Merlin's autonomous. We had merlin use light sensors to follow lines, color sensors to sense the beacon, gyro sensors to get direction, encoders to sense distance and he worked flawlessly. At the world championship his autonomous was outstanding. We will post videos of him soon. He hung reproducibly and did reproducible autonomous. We were honored to be able to play our last match with Electron Volts in which we scored the world record for the highest autonomous score. ​Below is the match.